In light of the current public health crisis and to prioritize the well-being of our staff & visitors, the gallery is currently open by appointment only. We ask all visitors to wear a mask when inside the gallery.

Benny Andrews: Portraits, A Real Person Before the Eyes 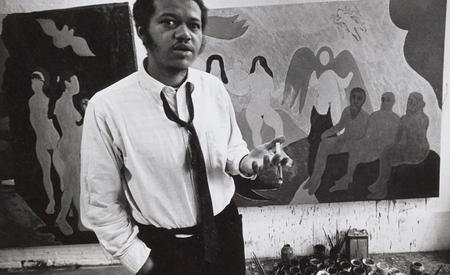 Michael Rosenfeld Gallery proudly announces the historic acquisition of the Estate of Bob Thompson (1937-1966). After 23 years of representation, working closely with the artist’s widow Carol Thompson and later, her heirs, the gallery acquired the Estate in 2019. The gallery has taken the last year to fully process this monumental acquisition which includes all remaining works in the family’s possession, artist sketchbooks, and the intellectual property rights. Michael Rosenfeld states: “Throughout my career, I have been devoted to the legacy of Bob Thompson. I enjoyed many years of close friendship and collaboration with Carol Thompson and following her passing, sisters Elaine and Cathy. Bob is one of the great twentieth-century painters; he has been and will always be at the core of the gallery’s program. Acquiring his estate is a great honor and responsibility; I am confident that I can continue to further his reputation and legacy with research, scholarship and exhibitions.”

Since 1996, Michael Rosenfeld Gallery has presented four solo exhibitions of the artist’s work, publishing catalogues for three: Bob Thompson: Heroes, Martyrs & Spectres (1997); Bob Thompson: Fantastic Visions, Paintings & Drawings (1998); Bob Thompson: Meteor in a Black Hat (2005), which traveled to the Haggerty Museum of Art of Marquette University in Milwaukee, WI; and most recently, Naked at the Edge: Bob Thompson (2015). The gallery has featured Thompson’s work in more than twenty group exhibitions, including the celebrated annual series African-American Art: 20th Century Masterworks (1994-2003); Facets of the Figure: A Spectrum of 20th Century American Art (1997); Out of the Fifties–Into the Sixties: 6 Figurative Expressionists (2001); African American Art: 200 Years (2008); and Figuratively Speaking (2017). Earlier this month, alongside Benny Andrews and Robert Colescott, Thompson was featured in the gallery’s online presentation at Frieze (May 8–15, 2020). Currently, his work can be seen in the gallery’s online exhibition Paper Power.

A forthcoming solo exhibition, Bob Thompson: This House is Mine, organized by the Colby College Museum of Art, Waterville, ME and curated by Diana Tuite, is scheduled to open in summer 2021 and will travel to the High Museum of Art, Atlanta, GA and the Smart Museum of Art at The University of Chicago. The exhibition aims to introduce Thompson’s work to new audiences, reexamining his oeuvre through the exploration of “his rejection of American painting and his refuge on the European continent” while considering how “legacies of dispossession, displacement, and exile shape aesthetic ownership.”

In the Sunday, May 17, 2020 edition of The Boston Globe, award-winning art critic Murray Whyte contributed an article devoted to the life and work of Bob Thompson. The article, “In 1950s Provincetown, a Black painter arrived to re-invent art history,” shares Thompson’s fascinating and tragically short story, highlighting his pivotal time spent in Provincetown, MA. Thompson first visited Provincetown in 1958 and then again in 1959; his last visit was in 1965, before dying shortly thereafter in Rome at age twenty-eight. Following his seminal time in Provincetown, Thompson began to look to the tradition of European art history as a fruitful source of inspiration. His art of the late 1950s and 1960s imbued figure painting with a new vitality at a time when abstract expressionism was at its apogee. He drew inspiration for his process and technique from jazz, leaning towards improvisation and spontaneously sourcing compositions from his unconscious. Thompson was also extremely knowledgeable about the history of art, riffing on iconic subject matter he ferreted and admired in the works of old masters. Thompson transformed and personalized historic images through his avant-garde sensibility of color and form; as Whyte notes: “the old and revered shot through with the now.” It is exactly this reworking of art historical masterpieces that has singled Thompson out as one of the most significant painters of his generation. Whyte declares: “Some of Thompson’s very best work—electric, gestural, composed with the geometric precision of Tintoretto or Nicolas Poussin—seethes with spontaneous energy, recharging the classics with visceral urgency.” 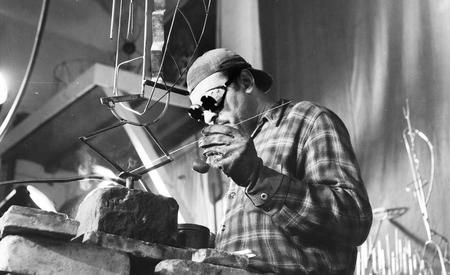 “…one might say that art, like science, is a constant probing of the unknown—a seeking. I believe an artist should make art that he feels relevant to his day, taking into account the works of artists of the past. The empty spaces within and around a sculpture post a challenge that has become for me almost an obsession.”[1] —Harold Cousins

Michael Rosenfeld Gallery is pleased to announce the representation of the Estate of Harold Cousins (1916-1992), furthering the gallery’s long commitment to twentieth-century American sculpture. An expatriate artist who lived and worked in Europe, Cousins is celebrated for dynamic abstract expressionist sculptures of welded metal. His bold experimentations in the medium—activated by an energetic relationship between positive and negative space—continue to captivate and inspire. Michael Rosenfeld states: “Harold Cousins was a visionary who forged a distinctive language merging his interests in nature and science; he is among a generation of often overlooked sculptors, who were once regarded as giants in the art world, exhibiting side by side with the two-dimensional artists of the era. Working with the support and guidance of his family, I am excited to re-introduce his work to an international audience and further his legacy.”

In tandem with this historic moment, the gallery is researching, cataloguing and preserving archival materials, including the artist’s personal archive of photographs, documents and ephemera—saved over the years by Cousins’ family—in preparation for a solo exhibition, a catalogue, and a comprehensive illustrated chronology. At this time, we share a selection of preliminary highlights from this valuable Archive which illuminates historic and defining moments from Cousins’ life and practice.

To learn more about Harold Cousins, and to view a selection of available works, click here.