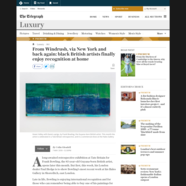 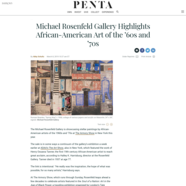 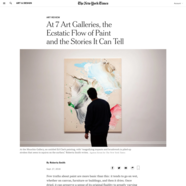 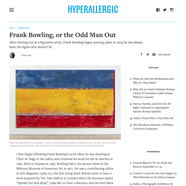 “The practice of painting within the boundaries of Formalism . . . provides a setting in which I am able to test and ultimately prove my own freedom.”

A versatile abstractionist who has made a career on both sides of the Atlantic, Frank Bowling was born in 1936 in British Guiana (now Guyana). In 1950, he moved to London, where he completed high school before enlisting in the Royal Air Force (RAF) in 1953. While in the RAF, Bowling befriended several art students with whom he visited London’s National Gallery. These trips inspired him to pursue painting, and in the late 1950s, his work caught the attention of artist Carel Weight, who encouraged him to apply to art school. In 1959, Bowling won a scholarship to the Royal College of Art. He graduated in 1962, having received the college’s Silver Medal in painting (classmate David Hockney won the Gold) as well as funding for travel to South America and the Caribbean. That same year, Bowling also had his first one-person exhibition, at Grabowski Galleries in London. Despite several early successes, Bowling was excluded from The New Generation: 1964, a major exhibition at London’s Whitechapel Gallery that featured many of his fellow graduates from the Royal College of Art. When he asked about this omission, Bowling was told that the country was “not yet ready for a gifted artist of colour.”  This moment, combined with a growing sense of frustration over being the only artist of his peers singled out for his background, were among several factors that motivated Bowling to leave London for New York in 1966.

Prior to moving to New York, Bowling had visited the city in 1961 and had been profoundly influenced by the works of abstract expressionist and New York School painters. In the mid-1960s, while pop art was on the rise in Britain, Bowling began working in an increasingly abstract vein. He developed a series of paintings based on the Fibonacci sequence and Jay Hambridge’s related theory of dynamic symmetry. These works aspired to “decolonize space in order to construct new commentaries around the narratives in the tradition of Western painting.”  In the late 1960s/early 1970s, Bowling’s interest in decolonized space turned towards the cartographic, as he began work on his celebrated “maps” paintings—large-scale canvases onto which Bowling would paint the outlines of continents and countries, often stenciling images with personal significance onto the map, and painting over the forms with washes of vibrant color. These works formed the basis of his groundbreaking 1971 exhibition at the Whitney Museum of American Art and drew praise from prominent critics such as Clement Greenberg, who quickly became a champion of Bowling’s work. Bowling has continued to push the boundaries of painting throughout his long career. In the mid-1970s, he scaled down the size of his canvases dramatically and began producing smaller, more spontaneous works. In the following decade, his paintings became more sculptural as Bowling added painted Styrofoam to their surfaces. Most recently Bowling has returned to acrylic as a primary medium, using it to create bold, dynamic, layered, larger-scale works that pulse with energy.

In addition to being an artist, Bowling has long been a theorist and teacher of art. From 1969 to 1972, he was a contributing editor of Arts Magazine, and he has written several essays on modernism, formalism, and the relationship between lived categories of identity and an artist’s individual vision and right to expression. Bowling has taught at the Cooper Union School of Art and Architecture, Columbia University, and a variety of other institutions in the United States and Britain. His paintings are part of the permanent collections of numerous museums worldwide, including (in New York): the Metropolitan Museum of Art, Museum of Modern Art, and Whitney Museum of American Art, as well as the Menil Collection, Houston, Texas; the Victoria and Albert Museum, London; and the National Gallery of Jamaica. He continues to live and work in New York and London and exhibit globally.