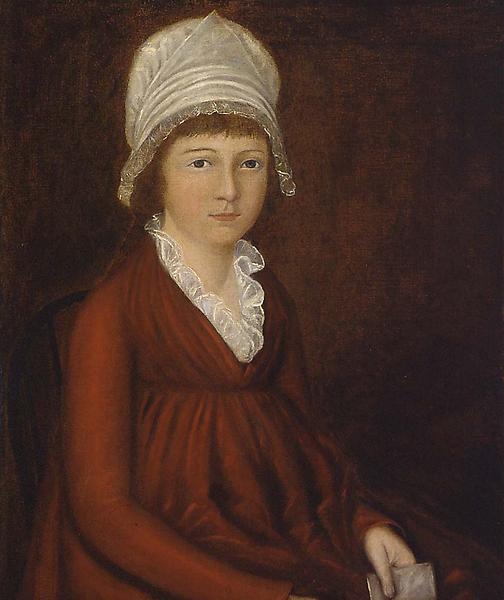 Joshua Johnson, whose last name is also listed as Johnston, is the earliest known professional painter of African heritage in the United States, but the details of his life remain obscured. Many of his patrons described him as a former slave, and other sources claim that he came to the U.S. from the West Indies as an indentured servant. But recently uncovered historical documents suggest that Johnson was most likely the son of a white man (George Johnson/Johnston) and an enslaved black woman owned by William Wheeler. Freed in 1782, Johnson became a portrait painter working in the limner style of frontal poses and arranged backdrops, and he traveled throughout Maryland and Virginia, painting wealthy plantation owners. Johnson depicted his subjects in stiff poses, often seated with dogs on their laps, and he tended to flatten the space of the picture plane. In 1798, Johnson advertised himself in the Baltimore Intelligencer as “a self-taught genius, deriving from nature and industry his knowledge of the Art; and having experienced many insuperable obstacles in the pursuit of his studies,” probably alluding to racial

discrimination and/or a history of slavery. From 1796 to 1824, the Baltimore directory listed him as a portrait painter and as a “Free Householder of Colour” in 1816 and 1817. After 1824, his name disappeared from public record. In 1939, J. Hall Pleasants, a Baltimore genealogist and historian, was the first to attribute paintings to Johnson and attempt to chart the history of his career. His one signed work, Sarah Ogden Gustin (c. 1805) is in the collection of the National Gallery of Art, Washington, D.C. Although much speculation exists and much research has been done, little factual information is known about Johnson’s life, but, as Jennifer Bryan and Robert Torchia have pointed out in the article, “The Mysterious Portraitist Joshua Johnson,” the recent discovery of Baltimore chattel records is an important step towards filling in the many gaps of his history. In 1988, the Abby Aldrich Rockefeller Folk Art Center of Colonial Williamsburg and the Maryland Historical Society published and organized the traveling exhibition Joshua Johnson: Freeman and Early American Portrait Painter.