Skip to content
Back to top Back to Exhibitions«
Betye Saar: CAGE, A New Series of Assemblages and Collages 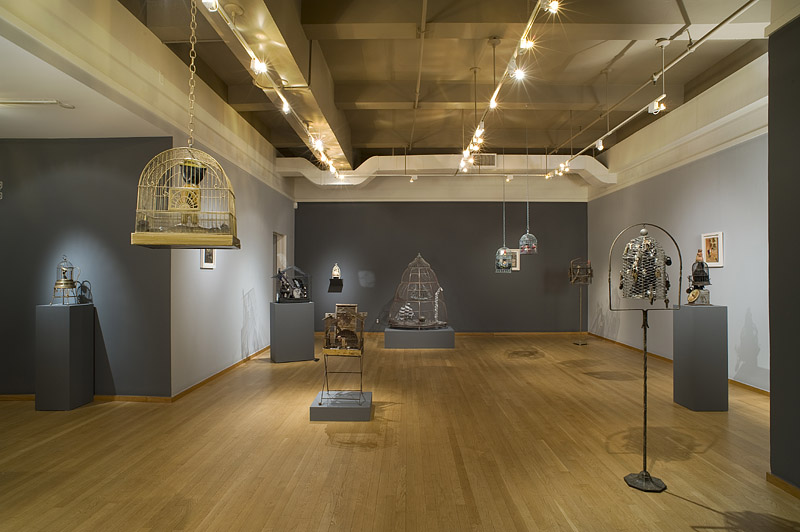 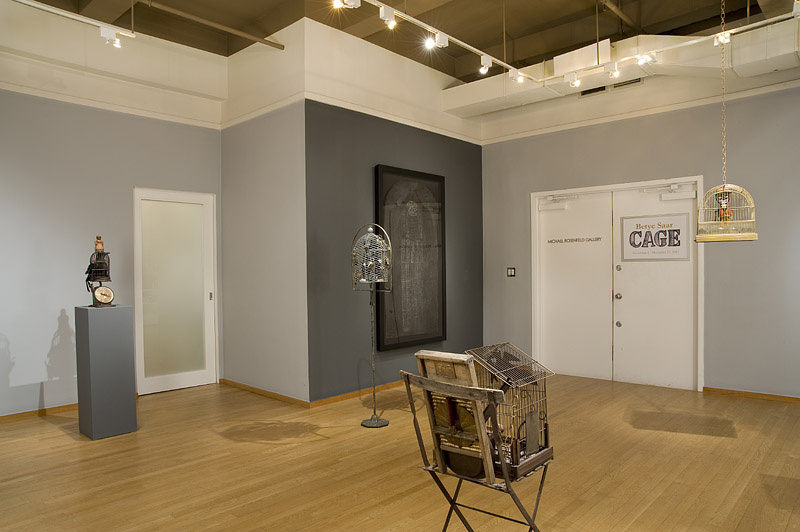 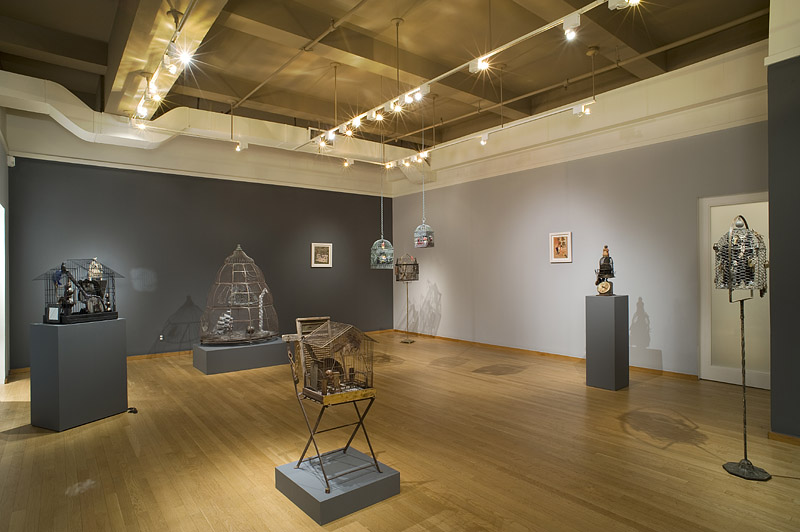 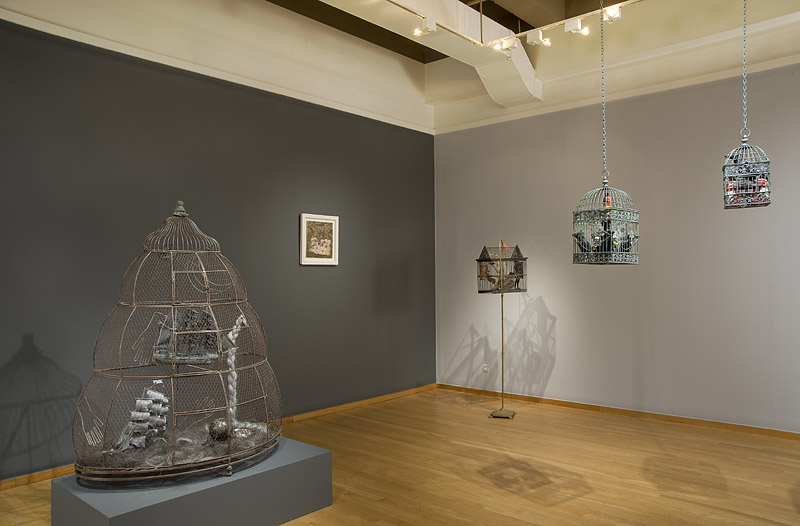 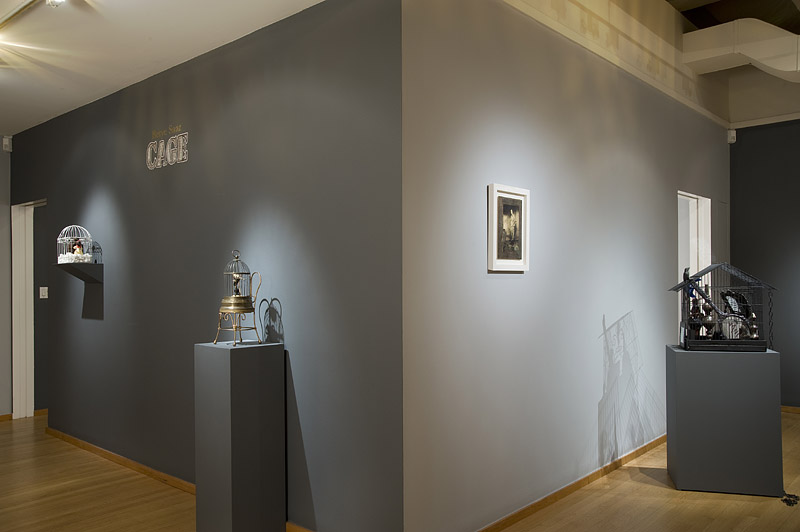 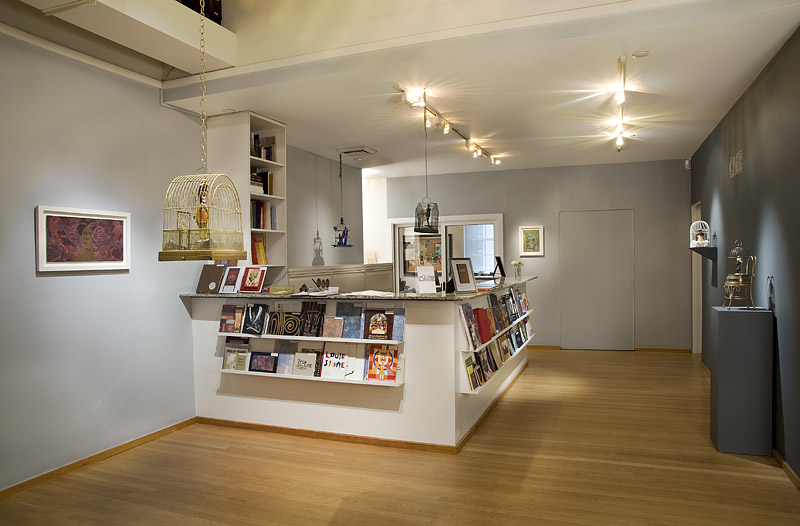 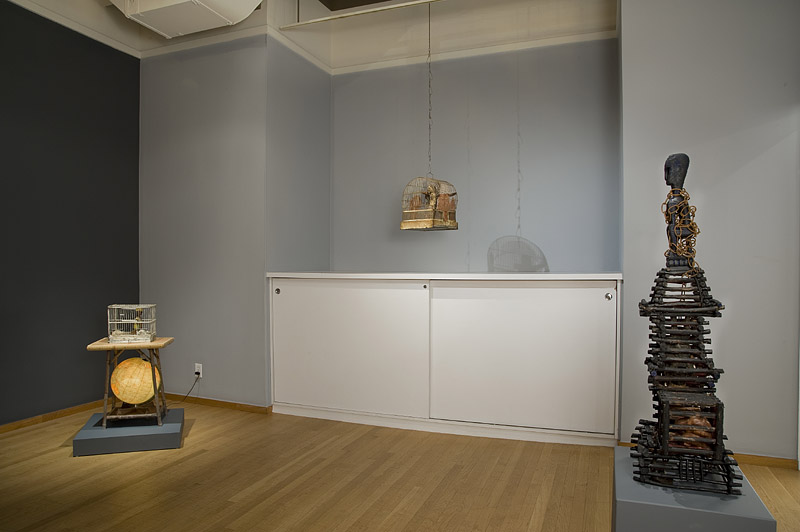 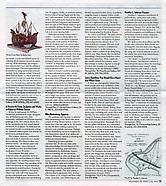 Betye Saar: CAGE, A New Series of Assemblages and Collages

(New York – October 20, 2010) Michael Rosenfeld Gallery is pleased to present its fifth solo exhibition for the artist Betye Saar (American, born 1926). Betye Saar: CAGE, A New Series of Assemblages & Collages will be on view from November 6 to December 23, 2010. This ambitious installation of twenty-one mixed-media assemblages and seven collages represents four years of intensive studio work by the eighty-four-year-old Californian. Over the years, Saar has collected various cages from flea markets, yard sales, and antique shops; these ordinary household objects now comprise the foundation for a series centered on forms of containment and confinement. In Saar’s art, the cage is a signifier of physical incarceration and a metaphor for social, psychological, spiritual, economic, and historical exclusion. But, consistent Saar’s affirmative outlook, the cage is also a bold symbol of resilience and survival. The assemblages and collages in Betye Saar: CAGE also share with her other works a global perspective interlaced with the artist’s personal interest in metaphysics, magic, mystery, legends, and superstitions. The questions of repression, disenfranchisement, and resistance that dominate the lives of many people around the world are fused with lessons from US history, African spiritualism, and the rich visual traditions of Afro-diasporic art.

The exhibition is accompanied by a fully illustrated color catalogue with an essay by noted scholar and professor George Lipsitz. In his essay, Lipsitz states:

"In the different works that Saar presents in Cage, inanimate objects evoke action and motion. Her ideas and arguments “move along,” propelled by birds that do not fly, banjos that do not play, ships that do not sail, cotton that does not grow, and servants who do not serve. Large figures in small cages symbolically rebuke a society where too many people are locked up in jails, locked out of opportunities, locked into habits they cannot break, and locked on to pursuits that will not make them happy. Through ordinary objects salvaged from the activities of everyday life—empty bottles, washboards, children’s toys, and mirrors—Saar reminds us that people can be imprisoned just as surely, just as securely, by desires, stories, and ideas as by stone walls and iron bars."

explained, “I am intrigued with combining the remnant of memories, fragments of relics and ordinary objects, with the components of technology. It’s a way of delving into the past and reaching into the future simultaneously.” In her work, Saar voices her political, racial, religious, and gender concerns in an effort to “reach across the barriers of art and life, to bridge cultural diversities, and forge new understandings.” In 1998, with the series Workers + Warriors, Saar returned to the image of Aunt Jemima, a theme explored in her celebrated 1972 assemblage, The Liberation of Aunt Jemima. Subsequent series have sought to reveal marginalized or hidden histories; she has examined the social invisibility of black Americans in service-oriented jobs, the construction of racial hierarchies based on skin tone within black communities, and the ways that objects can retain the memories and histories of their owners.

Saar has received numerous awards of distinction, including two National Endowment for the Arts Fellowships (1974, 1984), a J. Paul Getty Fund for the Visual Arts Fellowship (1990), and a Flintridge Foundation Visual Artists Award (1998). In 1994, she and artist John Otterbridge represented the United States at the 22nd São Paulo Biennial in Brazil. In 2005, the University of Michigan Museum of Art organized the traveling exhibition Betye Saar: Extending the Frozen Moment, which examined the use of photographic fragments in her work. A role model for generations of women, Saar has raised three daughters, including two accomplished artists (Alison and Lezley). In 2005, the Ackland Art Museum at the University of North Carolina presented work by all three Saar artists in the traveling exhibition Family Legacies: The Art of Betye, Alison and Lezley Saar. Her work is represented in numerous museum collections including the Detroit Institute of the Arts, High Museum of Art in Atlanta, Los Angeles County Museum of Art, Museum of Fine Arts in Boston, and the Metropolitan Museum of Art, Studio Museum in Harlem, and Whitney Museum of American Art in New York. Her work will be featured in several of the shows that comprise the upcoming Pacific Standard Time—a suite of twenty-six exhibitions funded by the Getty Foundation that will run concurrently in museums throughout California.

Founded in 1989, Michael Rosenfeld Gallery specializes in twentieth century American art; since 1996, the gallery has represented the artist Betye Saar.