Skip to content
Back to top Back to Exhibitions«
Decoding Myth: African American Abstraction, 1945-1975 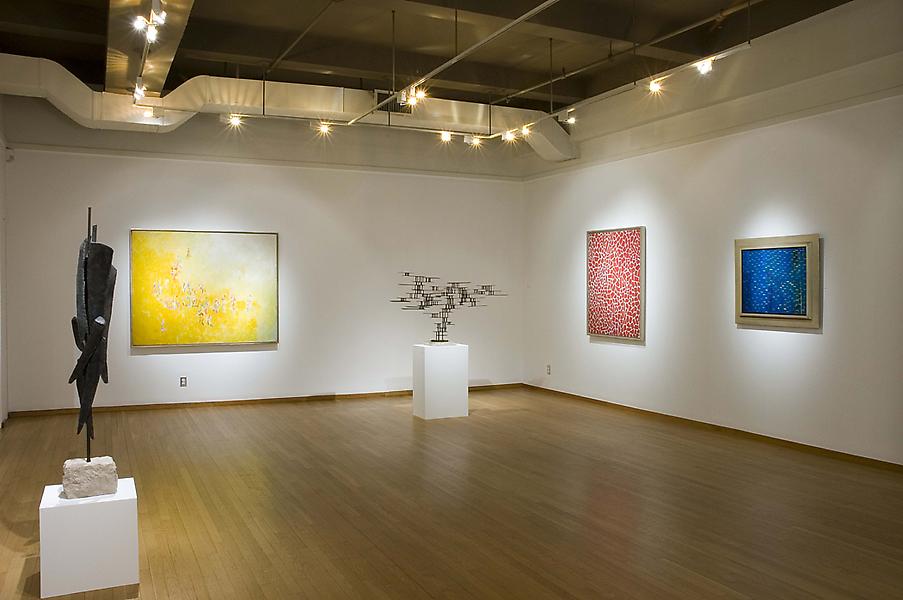 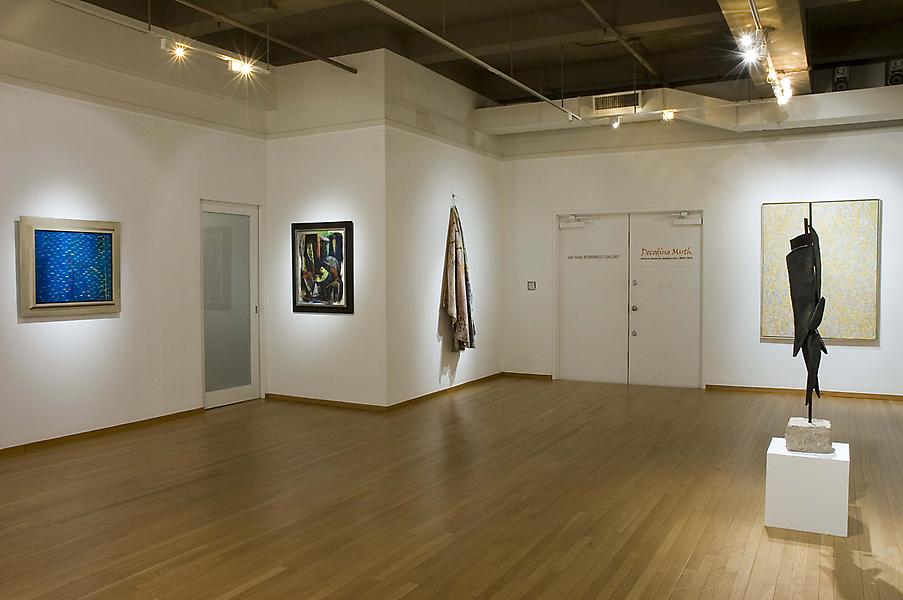 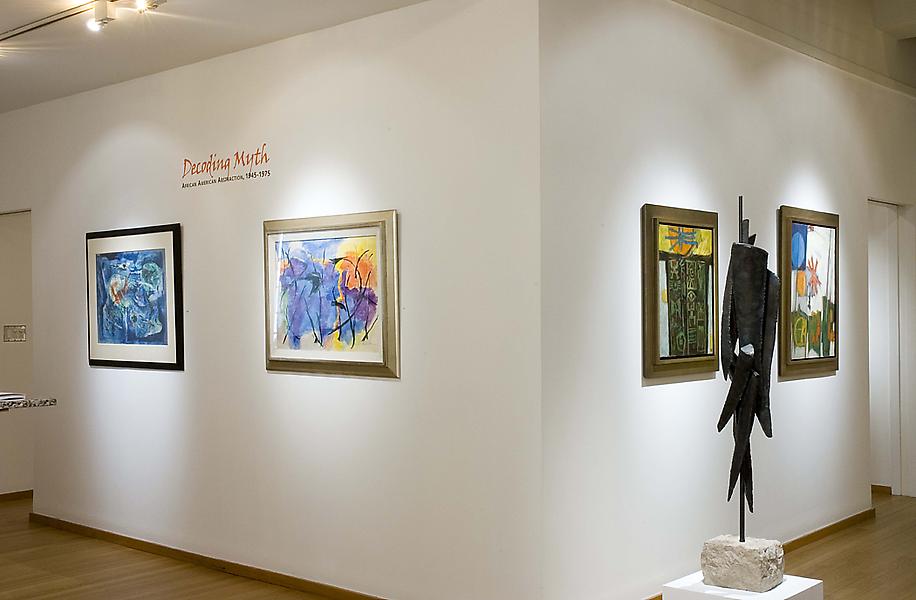 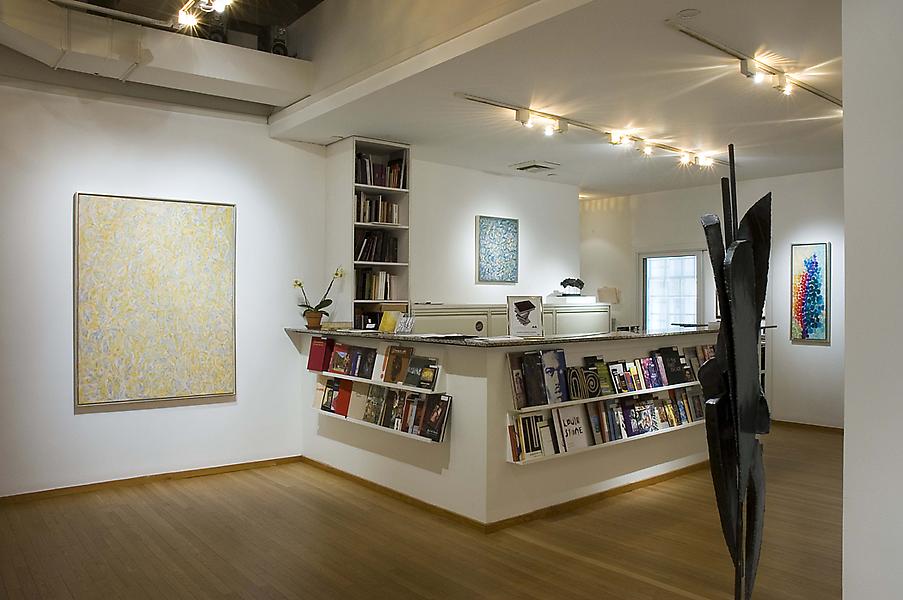 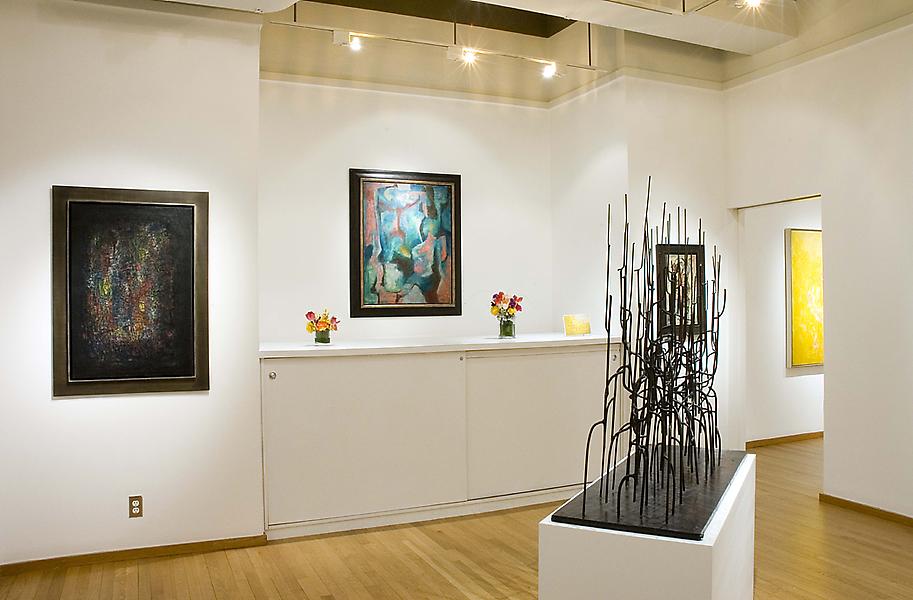 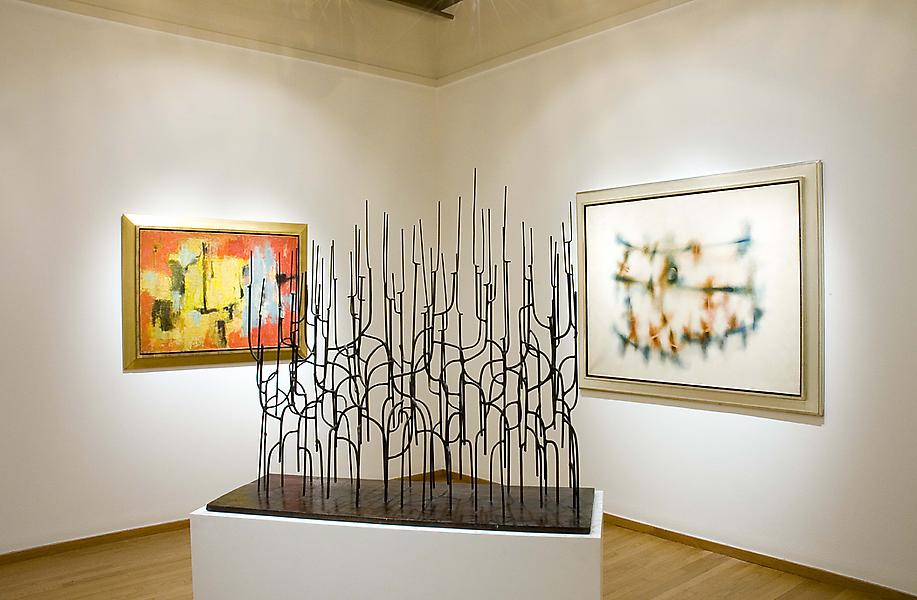 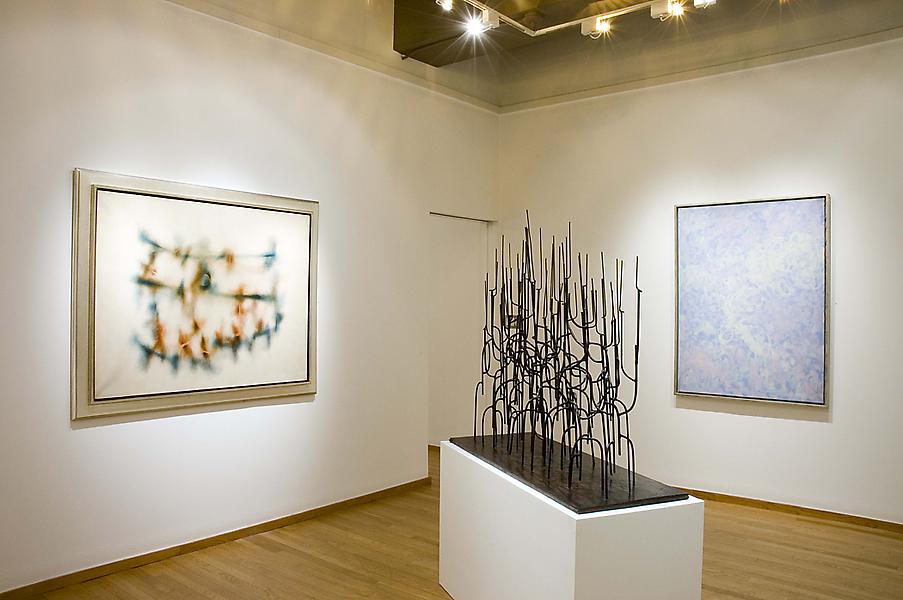 The exhibition features abstract painting and sculpture by seven prominent artists: Charles Alston, Harold Cousins, Beauford Delaney, Sam Gilliam, Norman Lewis, Alma Thomas and Hale Woodruff. All of these artists embrace formal issues of color, shape and line – allowing for a broad and richly varied interpretation of individual inspiration, references and affinities. Working alongside contemporaries like Adolph Gottlieb, Ad Reinhardt, Franz Kline and Robert Motherwell, these artists helped to define and shape the American abstract movement in the Postwar era. By setting aside representational imagery and specific narratives that referenced the African American experience, many such abstract works have been marginalized or ignored completely, perhaps considered “against type” or irrelevant. Alongside critical dismissal was the disapproval of many in the African American community-at-large, which valued social realism as a more important genre.


Charles Alston (1907-1977)
Born in Charlotte, North Carolina, Charles “Spinky” Alston moved to New York City with his family in 1915, but continued to spend summers in North Carolina until he was fifteen years old. A talented student, Alston took classes at the National Academy of Art and went on to receive his B.A. with a concentration in fine arts from Columbia University (1925-1929). While completing his M.F.A at Columbia University Teachers College, Alston was introduced to African art and aesthetics and was deeply influenced by modern art. After receiving his Master’s (1931), Alston worked at the Harlem Arts Workshop run by Augusta Savage at the 135th Street branch of the New York Public Library. The workshop was partially funded by the Carnegie Foundation and later came under the jurisdiction of the WPA Federal Arts Project. When the school needed more space, Alston found additional room for the school at 306 West 141 Street. Known as “306,” the school became a center for Harlem’s creative community. When funding for the school disappeared, Alston, along with Augusta Savage and Arthur Schomburg, became a founding member of the Harlem Artists Guild. In 1935, Alston became the first black supervisor within the Federal Arts Project when he was assigned to direct the WPA’s Harlem Hospital murals project. Alston’s work was influenced by the social realist art of the 1930s, the politically-charged work of the Mexican Muralists, and by jazz and nightclub culture. An accomplished sculptor, painter, illustrator, and printmaker, Alston was also an influential teacher at both the Art Students League (where he became the first black instructor in 1950) and the City University of New York. He was a founding member of the Spiral Group in 1963. Pomegranate Press will release a monograph on Charles Alston in March 2007, authored by Alvia J. Wardlaw.

Harold Cousins (1916-1992)
Harold Cousins, born in Washington, DC, studied at Howard University where he was influenced by the writings of Alain Locke. After serving in the United States Coast Guard (1943-45), Cousins returned to Washington, DC in 1946 to work as a postal employee and begin art studies. In 1948, Cousins moved to New York City and studied at the Art Students League with William Zorach and Will Barnett. In 1949, with the assistance of the GI Bill, Cousins left the United States and made his home in Paris, where he studied with the modernist sculptor Ossip Zadkine at L’Académie de la Grande Chaumière. Cousins’ work developed from figurative forms in terracotta and wood to abstractions of welded steel. In the early 1950s, Cousins learned oxygen-acetylene welding from sculptor Shinkichi Tajiri and in 1957, Cousins began creating “plaitons”, a term he coined to define his sculpture of repetitive metal plates welded together in a predetermined order. Cousins lived in Paris until 1967, and then moved to Brussels where he worked for the remainder of his life. He completed numerous public commissions and exhibited actively in Europe, but it was not until the 1996 traveling exhibition, Explorations in the City of Light: African-American Artists in Paris, 1945-65, organized by The Studio Museum in Harlem, that Cousins’ work was seen in the United States.

Beauford Delaney (1901-1979)
Beauford Delaney was born in Knoxville, Tennessee and studied with a local artist before moving to Boston in 1923. While in Boston, Delaney studied art at the Massachusetts Normal School, the Copley Society and the South Boston School of Art and spent time admiring the collections of the Museum of Fine Arts and the Isabella Stewart Gardner Museum. In 1929, Delaney moved to New York City and studied for a brief time at the Arts Students League with John Sloan and Thomas Hart Benton. His paintings of the 1940s and early 1950s consist largely of portraits, modernist interiors and street scenes executed in impasto with broad areas of vibrant colors. Delaney’s interest in the arts also included poetry and jazz, and he formed close friendships with writers such as James Baldwin and Henry Miller, and other artists, including Alfred Stieglitz, Georgia O’Keefe, and Al Hirschfeld. Although he maintained relationships with the artists of 306 and was a member of the Harlem Artists Guild, Delaney was consumed by his own artistic vision and was firmly connected to the Greenwich Village artistic community. In 1953, Delaney left New York and traveled to Europe, settling in Paris. Feeling a new sense of freedom from racial and sexual biases, Delaney focused on creating lyrical, colorful non-objective abstractions. These paintings, consisting of elaborate and fluid swirls of paint applied in luminous hues, are pure and simplified expressions of light. In 1978, The Studio Museum in Harlem organized his first major retrospective exhibition, and in 1979, Delaney died in Paris while hospitalized for mental illness. Recently, Michael Rosenfeld Gallery has presented two solo exhibitions of Delaney’s work: Beauford Delaney: Paris Abstractions from the 1960s (September 14-November 11, 1995) and Beauford Delaney: Liquid Light – Paris Abstractions, 1954-1970 (September 9-October 30, 1999). Delaney’s work was the subject of two recent traveling exhibitions: Beauford Delaney: The Color Yellow, organized by the High Museum of Art, Atlanta in 2002 and Beauford Delaney: From New York to Paris, organized by The Minneapolis Institute of Arts in 2005.

Sam Gilliam (b.1933)
Born in Tupelo, Mississippi, Sam Gilliam studied at the University of Louisville where he received his degree in fine arts in 1955 and his masters in 1961. Internationally recognized as the foremost contemporary African-American Color Field painter, Gilliam is widely known for his large, color-stained canvases which he drapes and suspends from ceilings and/or walls and thick “raked” canvases. Influenced by the emergence of abstract expressionism, the New York School, Color Field Painting and the Washington Color School, Gilliam’s early style developed from brooding figural abstractions to large paintings of flatly applied color and paintings of diagonal stripes on square fields. In 1965, Gilliam became the first painter to introduce the unsupported canvas and in 1975 he began to create geometric collages influenced by jazz. Later series include “quilted” paintings and, most recently, textured paintings that juxtapose metal forms. Gilliam’s work as an artist and teacher has influenced many. He lives and continues to works in Washington, DC. In 2005, Corcoran Gallery of Art organized the major traveling exhibition Sam Gilliam: A Retrospective.

Norman Lewis (1909-1979)
Norman Lewis was born in New York City and studied with Augusta Savage at the Savage School of Arts and Crafts (1933) and at Columbia University (c.1933-1935). During the Great Depression, Lewis taught art through the Federal Arts Project at the Harlem Community Arts Center (1936-1939), and later with Elizabeth Catlett and Charles White at the George Washington Carver School. Lewis frequented 306, an artist’s workshop headed by artist Charles Alston that served as a center for the most creative minds in Harlem. Although Lewis joined the Artists Union and was an ardent political activist, he believed that "political and social aspects should not be the primary concern; aesthetic ideas should have preference." Lewis’s work of the late 1930s and early 1940s was predominantly Figurative Social Realism, depicting the lives of the urban black families and workers. In the mid-1940s, Lewis abandoned Realism and began to explore Abstraction, becoming an important artist of the New York School and Abstract Expressionist movement. By the late 1940s, Lewis was represented by Willard Gallery in New York City and had developed his own personal calligraphic style consisting of fluid forms suggesting groups of figures in activity. In 1955, Lewis received the Carnegie International Award in Painting, making him the first African-American artist to receive this prestigious prize. In 1963, Lewis was a founding member of the Spiral Group, and in 1969, along with Romare Bearden and Ernest Crichlow, he co-founded Cinque Gallery, a downtown gallery dedicated to emerging minority artists. A recipient of a National Endowment for the Arts Grant (1972) and a Guggenheim Memorial Fellowship (1975), Lewis received his first retrospective exhibition in 1976 at the Graduate Center of City College, New York. More recently, Lewis has been the subject of two solo exhibitions: The Studio Museum in Harlem’s exhibition, Norman Lewis: Black Paintings 1946–1977 (April 1-September 20, 1998) and the Michael Rosenfeld Gallery exhibition, Norman Lewis: Intuitive Markings – Works on Paper, 1945-1975 (May 6-August 13, 1999).

Alma Thomas (1891-1978)
Alma Thomas is known for her large-scale abstract paintings comprised of rhythmic marks of color. Born in Columbus, Georgia, Thomas studied in Washington, DC at the Miner Normal School (1911-13), received a BS from Howard University where she studied under James Herring (1921-24), and later obtained an MA from Columbia University Teachers College (1930-34). While supporting herself as a teacher (1925-1960), Thomas painted still-lifes, created ceramic sculptures and directed marionette plays. In 1950, at the age of fifty-five, she began a formal study of art at American University with painter Jacob Kainen. Gradually departing from Realism, Thomas’s brushwork loosened, and by the late 1950s, she found her voice in Abstraction, patterning geometric shapes in rich colors against solid backgrounds. Her monumental canvases created in the 1960s were informed by the local abstract movement in Washington, DC known as the Washington Color School, which included artists Morris Louis and Kenneth Noland. However, her interest in color experimentation aligns her more closely to Josef Albers, Johannes Itten and Wassily Kandinsky. Inspired by nature, by her own observations of earthly and celestial phenomena and by knowledge of recent discoveries in the sciences, her work is devoid of political content, and reflects her belief that modern art, at its best, transcends politics and temporal concerns. In 1972, Thomas had the first solo exhibition given to an African-American woman by the Whitney Museum of American Art. In 1998, the Fort Wayne Museum of Art organized a traveling retrospective and published a comprehensive catalogue of her paintings.

Hale Woodruff (1900-1980)
Hale Woodruff was born in Cairo, Illinois and studied at the John Herron Art Institute in Indianapolis, the School of the Art Institute of Chicago, and the Fogg Art Museum at Harvard University. Encouraged by a bronze award in the 1926 Harmon Foundation competition, Woodruff traveled to Paris to study at the Académie Scandinave, the Académie Moderne, and with Henry Ossawa Tanner. In 1931, Woodruff returned to America for a teaching position at Atlanta University (1931-45). Throughout the Great Depression, Atlanta was his home, and Woodruff consistently turned to the Georgia landscape for inspiration. In 1936, he spent the summer in Mexico studying mural painting with Diego Rivera, and in 1948, Woodruff teamed with Charles Alston to work on the Golden State Mutual Life Insurance company murals in California, illustrating the contribution of African-Americans to the development of the state. His most famous public art commission, Art of the Negro (1950-51), a series of murals in the library at Atlanta University, celebrates the contributions of African-Americans to all the arts. A founding member of the Spiral Group, he died in 1980 after having created a diverse body of paintings and prints that span from realism to abstraction. In 1979, The Studio Museum in Harlem organized a major retrospective of his work entitled, Hale Woodruff: 50 Years of His Art.