Skip to content
Back to top Back to Publications«
Norman Lewis: Looking East

Norman Lewis: Looking East explores for the first time the profound impact of Asian thought, philosophy, literature and art on the life-long work of abstract expressionist Norman Lewis (1909-1979). Produced on the occasion of Michael Rosenfeld Gallery's fifth solo exhibition for the artist, the publication includes color reproductions of 35 paintings and works on paper spanning 1948 to 1974, and pages from never-before-viewed artist sketchbooks from the Norman Lewis Archive.

Norman Lewis: Looking East features new scholarship by Andrianna Campbell and Tetsuya Oshima. In his essay, Oshima traces how Lewis came to direct a serious eye to Asian art, deepening his commitment to it in the mid-1940s as he worked to create a universal pictorial art on his own terms. Art historian Campbell takes us back to post-World War II New York, when artists and scholars gravitated toward the idea of a cohesive world, in the context of which Lewis developed a new and celebratory visual language deeply informed by East/West aesthetic and cultural exchange.

Andrianna Campbell is a doctoral candidate in the Department of Art History at the CUNY Graduate Center, where she specializes in art from the modern and contemporary period. Her doctoral research focuses on Norman Lewis and Abstract Expressionism. Alongside her scholarly research, she is the author of essays and reviews on contemporary art for Artforum, Art in America, Frieze and Mousse.

Tetsuya Oshima obtained a Ph.D. at the Graduate Center of the City University of New York and from 2008 until 2015 served as Curator at the Aichi Prefectural Museum of Art in Nagoya, Japan. From 2015 until 2019, he held a position as Associate Professor at Hiroshima University. Currently, he serves as Associate Professor in the Department of Art Studies at Tama Art University in Tokyo. Oshima curated the major exhibition Jackson Pollock: A Centennial Retrospective (2011-12, Aichi Prefectural Museum of Art and The National Museum of Modern Art, Tokyo).

To order this publication, please contact the gallery at publications@michaelrosenfeldart.com. 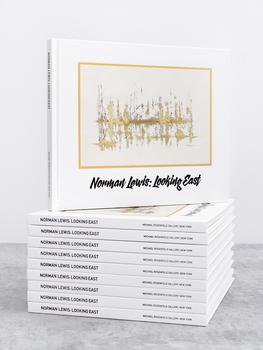