Skip to content
Back to top Back to Publications«
Truth & Beauty: Charles White and His Circle

Truth & Beauty: Charles White and His Circle reflects on the five-decade career of Charles White (1918-1979) and traces the trajectory of his most influential relationships forged in and around Chicago, New York and Los Angeles. The publication represents the artist’s formative years in Chicago’s South Side, where he attended the School of the Art Institute of Chicago and was deeply involved in organizations like the Art Crafts Guild and The South Side Community Art Center. It also evidences the impact White had on artist communities and institutions in New York, Mexico, and Southern California, including the Art Students League, 306 Studio, the Harlem Artist’s Guild, and the Spiral Group.

In order to elucidate White’s profound friendships, this catalogue reproduces essays on his art, career and influence written by Andrews, Bearden and Crichlow, as well as reflections by Biggers, Cortor, Lawrence, Lee-Smith and Woodruff, that were published in a 1980 special issue of Freedomways honoring White’s life. Truth & Beauty: Charles White and His Circle also includes a particularly illuminating autobiographical essay written by White which appeared in the April 1955 issue of the leftist publication Masses & Mainstream. In “Path of a Negro Artist” – reprinted here in its entirety – White provides a poignant account of his family, his modest upbringing and the unique challenges of being black in America. These texts, together with White’s biography provide context to White’s life and work. 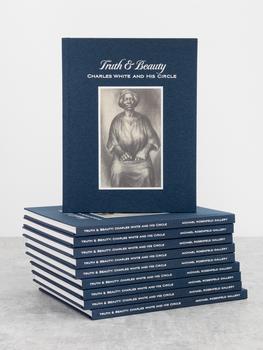