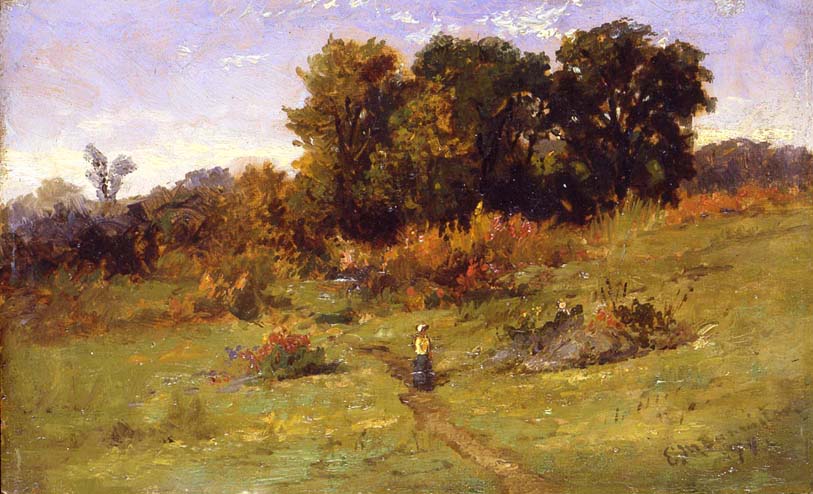 Noted New England landscape painter Edward Mitchell Bannister was among the first African Americans to win major recognition as an artist. Born to a Barbadian father who died in 1832 and a mother who was a native of St. Andrews, New Brunswick, Bannister taught himself to sketch as a child. After his mother died (1844), Bannister went to work as a cook on a coaster, an experience that amplified his fascination with the sea. When he was about twenty years old, Bannister settled in Boston, where he studied anatomical drawing at Lowell Institute with artist/lecturer William Rimmer, worked as a barber, and began painting portraits. Around 1855, Bannister married Christiana Carteaux, a successful businesswoman of Narragansett Indian descent, who owned a number of hairdressing salons, and in 1869, the couple moved to Providence, Rhode Island. Bannister’s first great success as an artist came in 1876, when his landscape painting Under the Oaks won first prize at the Philadelphia Centennial Exposition. When the awards committee realized Bannister was African American, he recounted, “an explosion could not have created more of a sensation in that room.” The painting was later sold in Boston for $1500, a high price for a work by a living American artist at the time. Afterwards, a rapid succession of honors and awards enabled Bannister to devote all his time to painting. He was greatly influenced by the French Barbizon School, whose serene depiction of nature and idealization of the laborer lent themselves philosophically to Bannister’s belief in the underlying harmony between all created things. A prominent artist by 1878, Bannister co-founded the Providence Art Club. In 1901, he died during an evening prayer meeting at the Elmwood Avenue Baptist Church, where he and his wife were honored members. Bannister’s paintings captured the wild beauty of the American landscape: picturesque plains, open prairies, desolate beaches, and turbulent seas. Although his notoriety suffered after his death, in 1978, Manhattan’s Kenkeleba House rediscovered Bannister, and in 1992, the Whitney Museum of American Art exhibited his work at their Stamford site, publishing a modest catalogue.