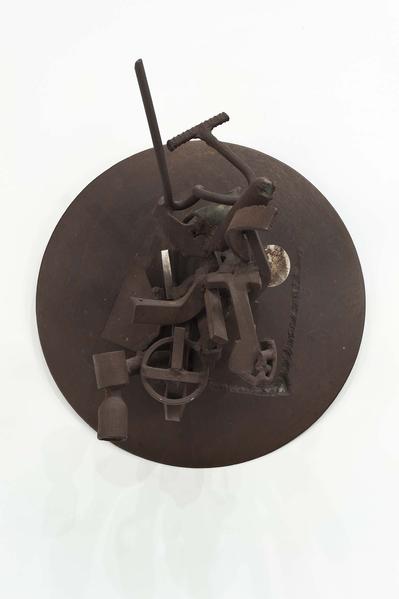 “The Lynch Fragments have changed my life. They made this life of thirty years as a sculptor. They are the core to all the work. If anybody ever knows I lived, this is going to be why.”[i]

A passionate artist with a global, African diasporic perspective, Melvin Edwards was born in Houston, Texas in 1937 and grew up in the segregated south. When he was in high school, an art teacher introduced him to abstraction, and Edwards decided to study art in Los Angeles, a move that also offered “the only way to get out of Texas at the time.”[ii] After attending a few different universities, Edwards received a football scholarship for the University of Southern California and began his studies with the intention of focusing on painting but soon switched to sculpture. While Edwards was at USC, theories of art continued to hold on to an ideal of “pure” abstraction and the pursuit of form for its own sake in painting and sculpture. Such formalist aspirations existed in the same moment and the same country as the civil rights movement, and Edwards, who had become increasingly active in the fight for equality, immediately understood the limits of an art devoid of content. Like William T. Williams, he worked to reconcile his interest in abstraction with his passion for telling the stories of black Americans, searching for a way that abstract art could speak to historical and contemporary struggle. In 1963, as part of this search, Edwards created Some Bright Morning, the first sculpture of what would collectively become known as his Lynch Fragments. With this work, Edwards realized, “I had come onto something rooted in what I was interested in, politically and aesthetically.”[iii]

The Lynch Fragments works now number over 200, and they have become a recurring theme in Edwards’s entire body of work. Made from steel welded with various metal objects the works tread the border between representation and abstraction and invite both intellectual and visceral responses. Wall-mounted and roughly a foot in size, these dynamic assemblages appropriate everyday objects for their aesthetic purposes, but the objects they incorporate—railroad spikes, chains, machetes, axe blades, scissors, bolts, gears, hammers—typically have violent and destructive as well as creative associations. Transformed by the welding process but still recognizable as the tools of power and force, “the fragments register the moral ambiguity of treating aesthetically a material imbued with violence. As much as steel has many uses, Edwards coaxes a variety of expressive qualities out of his materials, but details [also resist] a formalist reading.”[iv] Named after a practice that used the tortured bodies of individuals as emblematic in order to terrorize an entire community and maintain a system of white supremacy, the Lynch Fragments works thus invoke and invite associations to systems of racial oppression worldwide, and they call attention to the physical force that maintains those systems of power—the use of physical pain and psychic trauma to terrorize, subjugate, humiliate, and degrade. But, the tools of violence in these works, removed from a concrete context, are also evocative of resistance and liberation through insurrection.

Edwards’s work challenged prevailing aesthetic and political beliefs in the art world, and his career as an artist got off to an impressive start. In 1964, he received a John Hay Whitney Fellowship, and shortly before finishing his BFA in 1965, Edwards had his first solo show, at the Santa Barbara Museum of Art. Towards the end of the 1960s, after exhibiting successfully at several venues on the West Coast and receiving honors from the Long Beach Museum of Arts and Los Angeles Contemporary Art Council, Edwards moved to New York. In 1969, he created Pyramid Up and Down Pyramid, a large barbed-wire sculpture, for the X to the Fourth Power exhibition at the Studio Museum in Harlem. A year later, the work appeared again in Edwards’s solo exhibition at the Whitney Museum of American Art. He received a National Endowment for the Arts Fellowship for Sculpture in 1970 (and a second one in 1984) and a Guggenheim Foundation Fellowship in 1975. In 1988 and 1989, two successive Fulbright Fellowships enabled him to travel to Zimbabwe. Edwards had long been interested in Africa and its diasporic cultures in Brazil, Cuba, and the United States, incorporating references to Yoruban Orishas (deities) in works such as Gate of Ogun (1983), which invokes Ogun, a powerful warrior figure who often combats injustice and the Orisha associated with metal, metalwork, and technology. Edwards’s trip to Zimbabwe affirmed his affection for Africa and its diverse cultures and imparted a profound sense of satisfaction “with the notion of who we are.”[v] This trip was the first of many to Africa, and Edwards currently maintains a residence in Senegal as well as in New York.

In 1972, Edwards began a thirty-year career as a professor at Rutgers University, retiring in 2002. His dedication to education is also evident in his passion for public sculpture. Large-scale, welded-steel works by Edwards appear at various public sites throughout the country, often in spaces typically underserved by the arts. Edwards’s achievements have been celebrated by a variety of institutions throughout his career, but he did not have his first retrospective until 1993, at the Neuberger Museum of Art in Purchase, New York. Recently, there has been an increase of interest in Edwards’s work, and his sculpture has been included in several major exhibitions, including the international traveling exhibition Now Dig This! Art and Black Los Angeles 1960–1980 (2011-2012) and Witness: Art and Civil Rights in the Sixties at the Brooklyn Museum (March-May, 2014). His work is represented in several prominent public collections including the  Los Angeles County Museum of Art;  Museo de Artes Visuales Alejandro Otero, Caracas, Venezuela; Wadsworth Atheneum, Hartford, Connecticut; Winston-Salem State University, North Carolina; and in New York, the Museum of Modern Art, Metropolitan Museum of Art, Schomburg Center for Research in Black Culture, and the Studio Museum in Harlem.