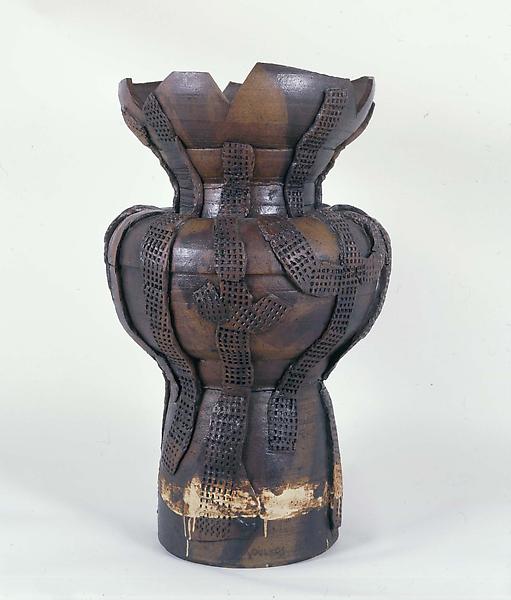 “I brush color on to violate the form, and it comes out a complete new thing, which involves a painting concept on a three-dimensional surface, a new idea.  These things are exploding, jumping off.  I wanted to pick up on that energy.  That’s different from decorating the surface, which enhances form….I wanted to change the form, get more excitement going.” *

Born in Bozeman, Montana in 1924, Peter Voulkos was one of five children in his close-knit family. His parents were Greek immigrants, and during the Depression, Voulkos held several jobs in order to help the family survive. In 1942, Voulkos finished high school and made his way to Oregon, where he found work making floor molds for engine castings and casting iron fittings for American Liberty ships. In 1943, he was drafted into the US Army Air Corps and spent most of the war in the Pacific theater. With funding from the GI Bill, Voulkos enrolled in courses at Montana State College (now University) in his hometown of Bozeman after the war. In 1951, he received his bachelor’s degree and used the remainder of his GI Bill funding to earn a Master of Fine Arts degree from the California College of Arts and Crafts in Oakland, which he completed in 1952. That same year, Voulkos participated in his first gallery exhibition, and in 1953, he traveled to New York, where he frequented the Club and the Cedar Tavern, meeting artists such as Franz Kline, Jack Tworkov, Philip Guston, and Robert Rauschenberg. That same year, Voulkos’s sculpture was included in two important New York exhibitions—Good Design at the Museum of Modern Art (MoMA) and Designer Craftsmen, USA 1953 at the Brooklyn Museum, where he was awarded the juried exhibition’s top prize. In 1954, he began teaching at the Los Angeles County Art Institute (now Otis), where he eventually established a ceramics department.

In the mid-1950s, after his time in New York, Voulkos began to move away from the throwing and glazing skills he had perfected as a student. Embracing abstract expressionism’s emphasis on the gestural in art, Voulkos attempted to make room for the spontaneous in ceramic sculpture, marking, altering, and destroying his works to produce new forms. By 1958, he was creating work on a much larger scale, assembling wheel-thrown pottery elements into eight-foot constructions that he coated with an epoxy resin, turning the artwork itself into an analysis of the process of pottery-making. Voulkos’s radical deconstruction of the traditional ceramics process and form would inspire countless ceramicists who followed, but in 1959, the iconoclastic thrust of his work disturbed the conservative administration at the LA County Art Institute, and he was fired from teaching there.

Undaunted, Voulkos continued to explore new approaches to sculpture as his career continued to rise. In 1960, Peter Selz curated an exhibition of his work for the Penthouse Gallery at MoMA, and Voulkos began to work in bronze, opening a foundry in Berkeley with fellow University of California Berkeley faculty members Don Haskin and Harold Paris. Voulkos’s bronze works were even greater in scale than his ceramics, and at the end of the decade, he created Mr. Ishi, an eighteen-by-forty-foot bronze work commissioned by the Oakland Museum.

Like Toshiko Takaezu, Voulkos had been greatly influenced by the Japanese folk art movement. He had read Bernard Leach’s A Potter’s Book and had also met Hamada Shoji and Yanagi Soetsu during Leach’s lecture tour. This interest endured throughout Voulkos’s career, and in 1979, he made a series of plates fired in an anagama, a Japanese wood-fired kiln, which operates at high temperatures, producing a richly textured surface. During the last two decades of his life, Voulkos made most of his pottery in public, at demonstrations throughout the United States and Japan.

Possibly more than any other artist, Voulkos had a tremendous impact on ceramics art, creating “a vocabulary of actions and forms that are now fixed in the language of contemporary clay, including ‘passthroughs’ (knobs of porcelain pushed through a stoneware piece from the back), stacks (. . . tiered, chimney-shaped structures of thick clay . . .), and ice buckets (short, thick, squarish containers, always cracked).”†