Skip to content
Back to top Back to Exhibitions«
Benny Andrews: For the Love of God 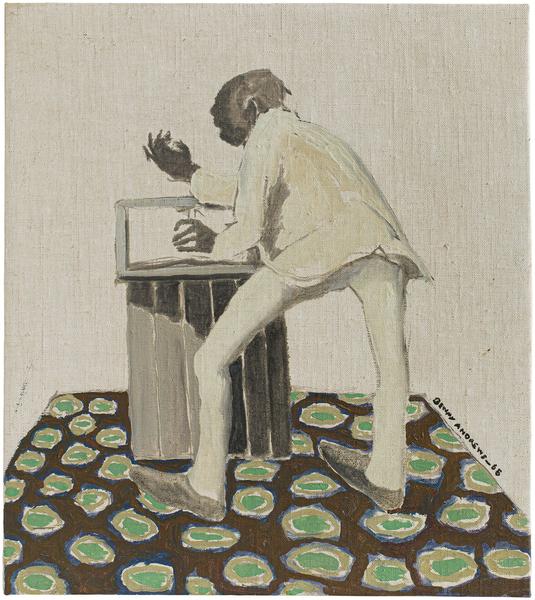 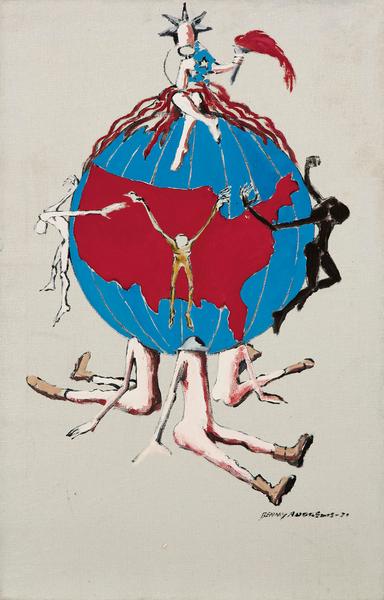 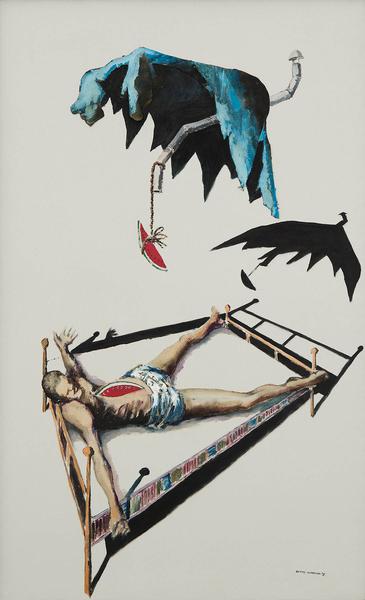 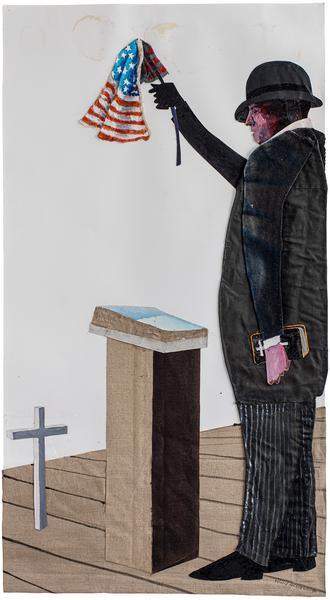 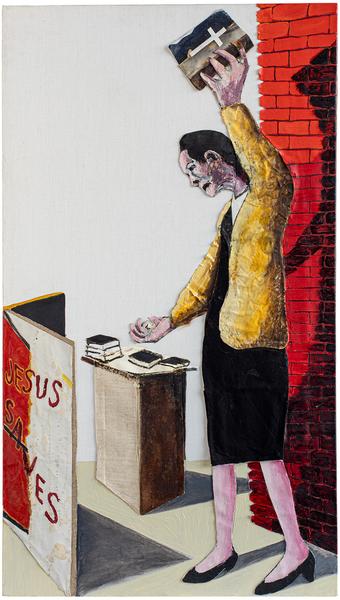 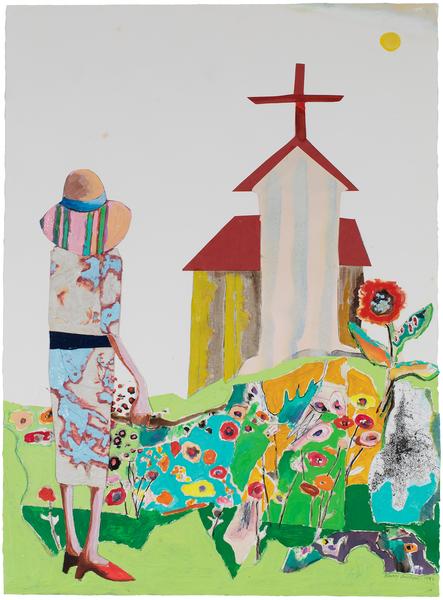 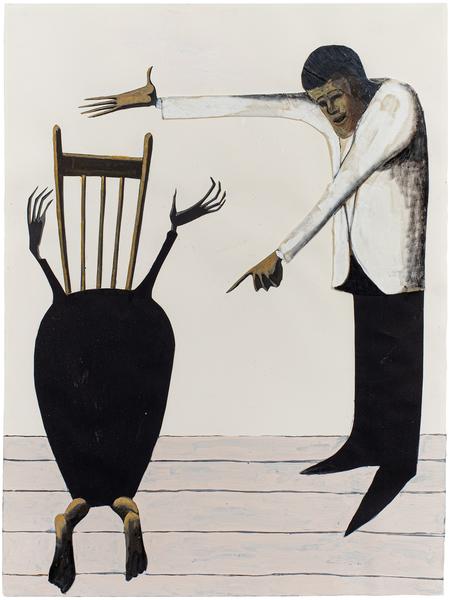 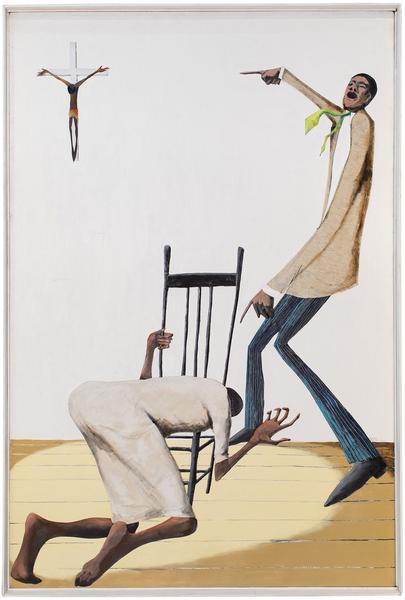 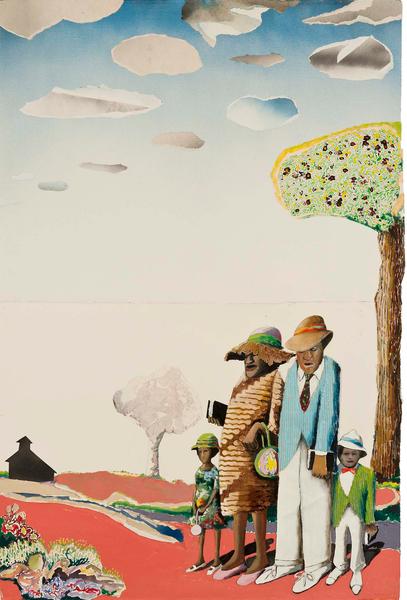 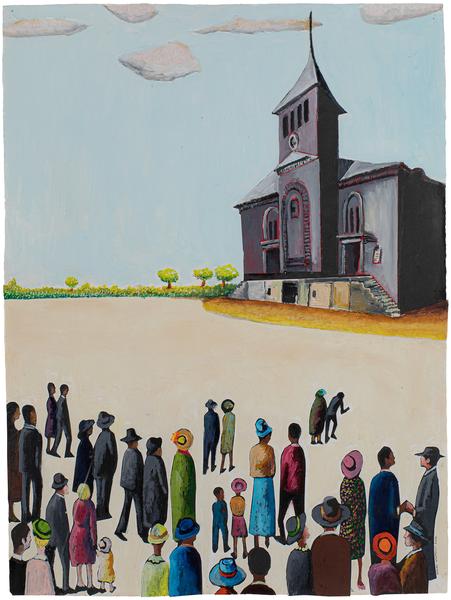 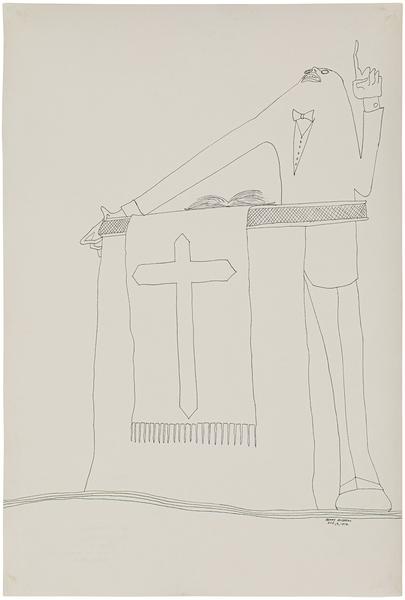 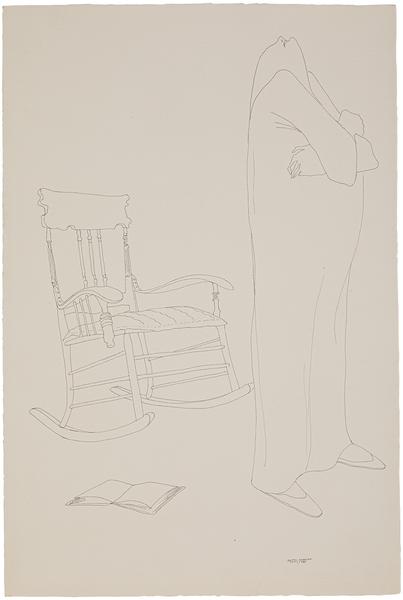 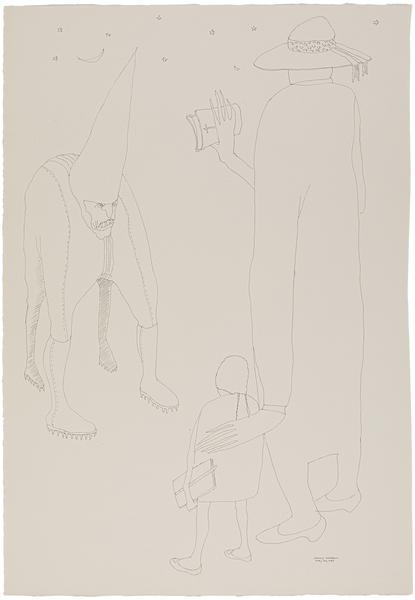 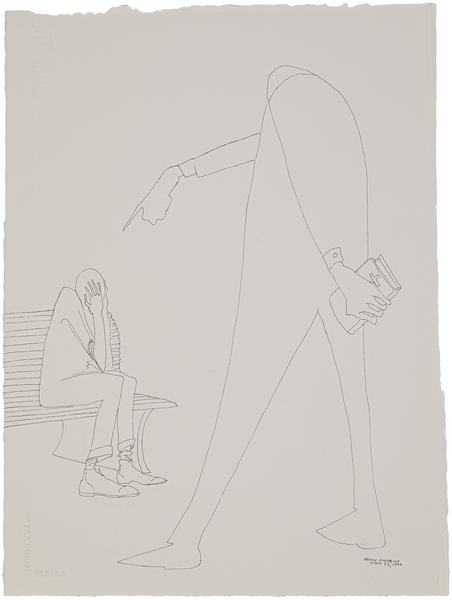 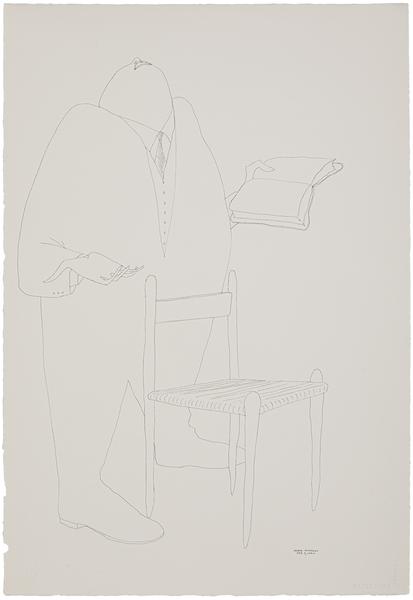 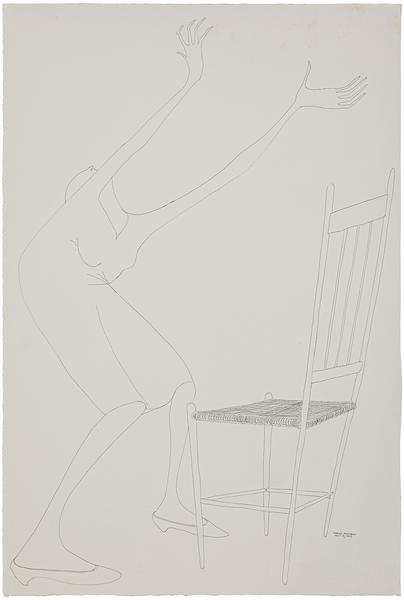 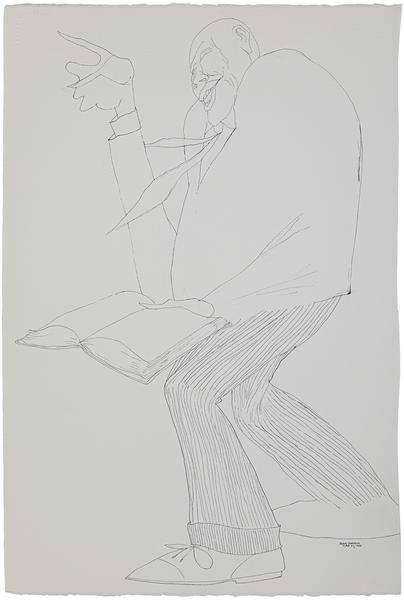 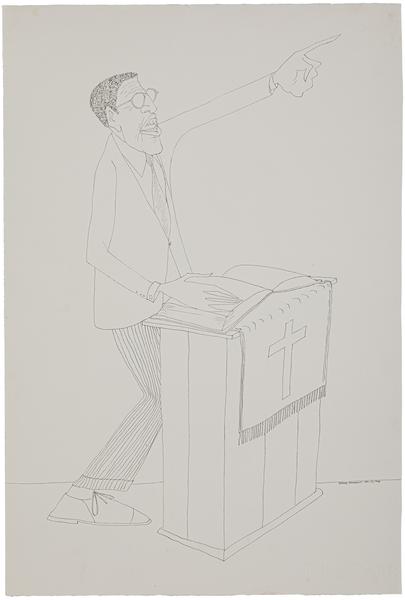 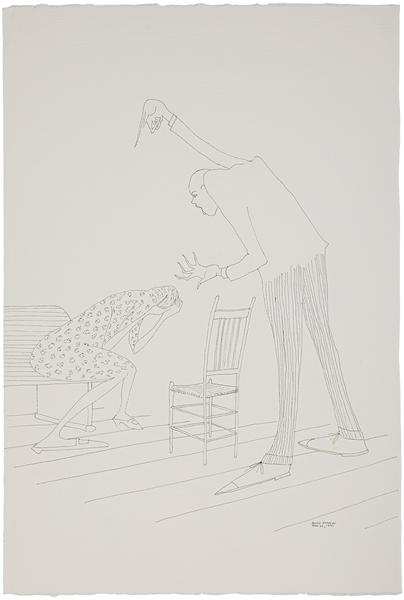 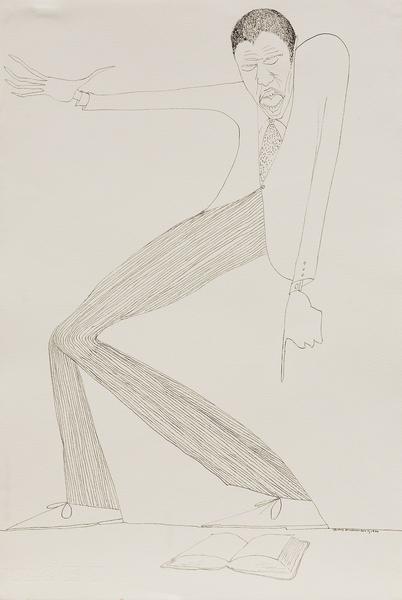 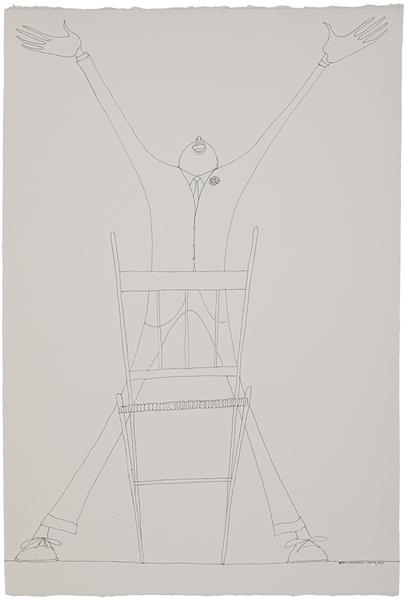 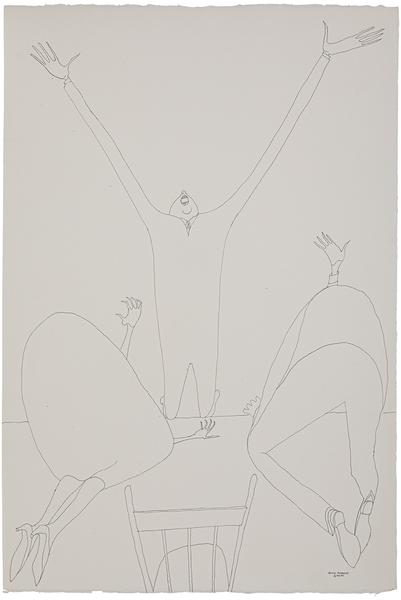 “I tried to capture the enormous emotional release that was expressed in those services. This poor community of African-Americans, oppressed through segregation and lacking many of the necessities needed for a decent life, could find relief in only one place, the church. …My hope is that this body of work transcends my particular experiences and speaks [to] a larger audience about the human condition…” —Benny Andrews

Michael Rosenfeld Gallery is pleased to participate in the Art Dealers Association of America (ADAA) Art Show 2021 with the presentation Benny Andrews: For the Love of God, a solo exhibition of collage paintings and ink drawings thematically united by the artist’s recursive engagement with subjects related to spirituality, religion, and community. Comprising works dating from 1966 to 2004, the exhibition features a group of Andrews’ refined, rarely seen ink drawings alongside a strong selection of his collage paintings on paper and canvas, constituting a concise survey of the artist’s insightful reflections on religion’s complex role in American society.

Benny Andrews (1930–2006) was born and raised in a rural farming community outside of Madison, Georgia, and exhibited a talent for artistic creation early in his childhood. As a young adult he served in the US Air Force, which allowed him to attend the School of the Art Institute of Chicago (SAIC) on the GI Bill following an honorable discharge in 1954. Andrews developed his “rough collage” technique as a student at SAIC in the late 1950s; by adhering scraps of paper and found fabrics to his supports, the artist sought to convey the “rawness” of his subjects and their material reality, originating a novel painting process that captured the immediacy of everyday life. Shortly after graduating in 1958, Andrews moved to Manhattan’s Lower East Side, where he quickly became immersed in the neighborhood’s burgeoning avant-garde scene. Coming into artistic maturity in the decades when abstraction and minimalism were ascendent, Andrews’ unwavering commitment to figuration was matched by his dedication to his subject matter, namely the struggles, joys and sorrows of historically marginalized people. This approach resulted in a prolific body of work that embodies a sprawling range of themes executed with Andrews’ singular blend of expressionistic formalism, surrealist-inflected allegory, and biting social commentary. Though he lived most of his adult life in New York, Andrews always considered himself a product of the social and cultural environment of the South. Accordingly, the religious community of his upbringing as well as religion’s sociopolitical status within the larger context of American culture comprise prevailing themes in his work.

In his acclaimed Revival series, Andrews was inspired by memories of his childhood experiences as a member of Plainview Baptist Church. Seeking to convey the centrality of the church in Black American life in the rural South, Andrews’ Revival works emphasize the social, political and spiritual capacities through which the parish served the community. The artist’s portrayals of ministers and congregations at worship capture the fervor experienced by the devout through his figures’ exaggerated postures and ecstatic expressions, effectively conveying the spiritual transcendence of his subjects over their material reality. While the Revival series constitutes Andrews’ most direct engagement with the subject, meditations on the role of organized religion and spiritual enlightenment may be found in many of the series he completed, including several works from his America Series. Executed between 1990 and 1991, the series is grounded in Andrews’ conception of the US as a massive, often unwieldy mosaic, and portrays several archetypes for whom religion is a defining aspect of their identity or profession, such as evangelists, clergymen, political opportunists, and zealots. The integral function of the church in the Black community reemerged in two later series Andrews began in the final decade of his life. Works from his Langston Hughes series, dedicated to the celebrated poet and social activist, and his W.W. Law paintings—which likewise pay homage to an important civil rights leader, Westley Wallace Law—emphasize the church as a primary site of organization for activists during the civil rights movement. Speaking to the broad spectrum of human emotion through the lens of religious community, the works on view in For the Love of God testify to Andrews’ unique capacity to converge rich cultural tradition, penetrating social commentary, and spiritual awakening in a single image.

A master of figuration dedicated to portraying the social realities he experienced throughout his life, Andrews authored an expansive body of ink-on-paper drawings that form a visual and conceptual through-line within his oeuvre. The trajectory of Andrews’ line drawings traverses the length of his career, with his unique figurative style and delicate technical process appearing fully formed in the early 1960s; extending to the last few works he completed before his death, these drawings amount to a foundational group of compositions that both mirror and expound upon the concerns of his painting practice. Like many of his paintings, Andrews’ line drawings dispense with dimensional modeling in favor of a strategically stripped-down draftsmanship, suggesting volume in his figures through a careful balance of silhouette, select identifying features, and negative space. These works were executed through a process that was straightforward but required a great deal of skill: after sketching his composition in pencil, Andrews used a crow-quill pen dipped in India ink to apply thin, continuous lines atop the sketch before erasing any stray traces of graphite. The result is an incredibly clean, minimalist drawing, where the artist’s sensitive facture and expressive figuration shine through an adroit economy of form. The line drawings are as formally versatile as they were generative: some stand on their own as unique compositions; some exist as studies for larger painting projects; and others are designs Andrews used in his acclaimed body of lithographs, etchings, and Xerox prints.

Michael Rosenfeld Gallery has been a proud member of the Art Dealers Association of America (ADAA) since 2000.

On Sunday, November 7, from 12 to 3PM, the Director of the Andrews-Humphrey Family Foundation, Kyle Williams, will be in our booth to speak about the artist’s life and work.