Skip to content
Back to top Back to Exhibitions«
Charles White: Let the Light Enter, Major Drawings 1942-1970 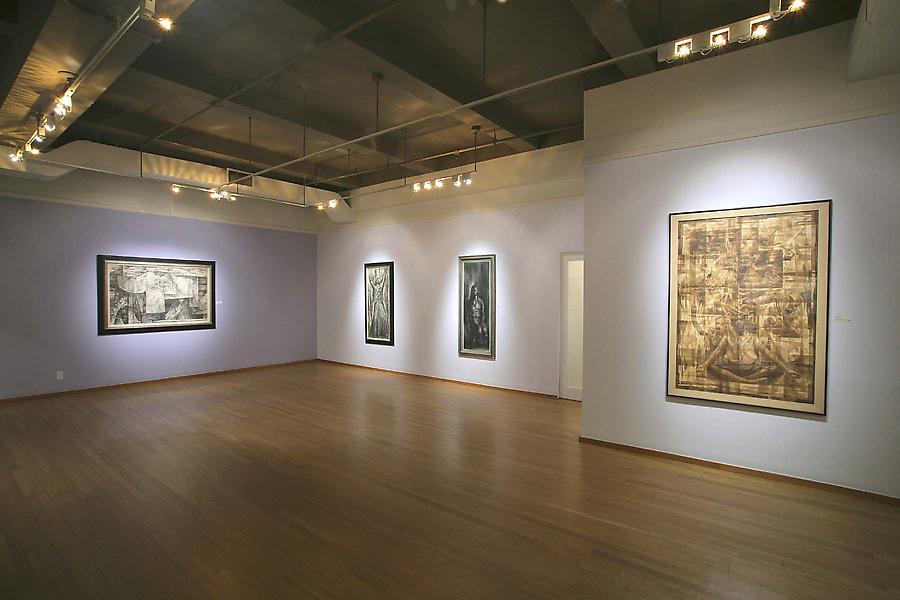 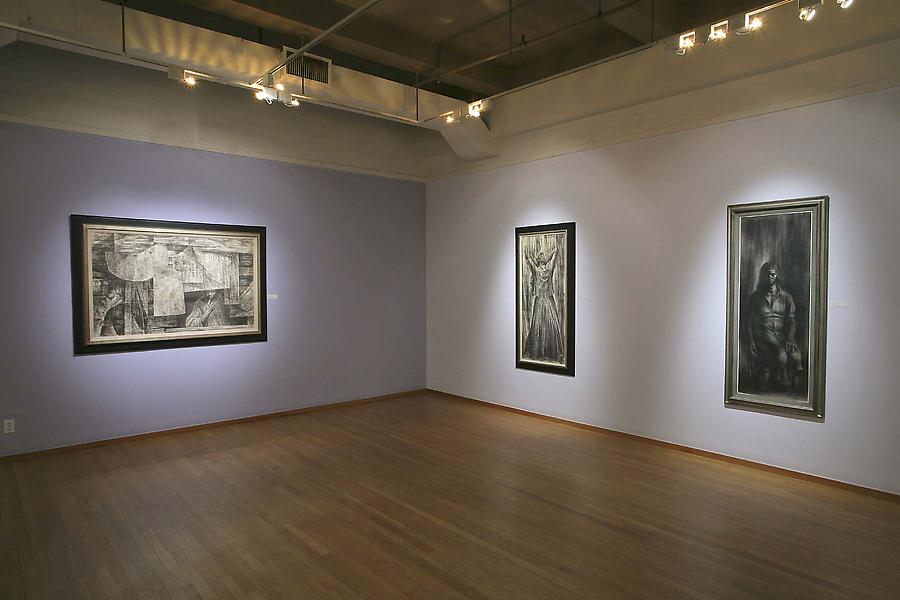 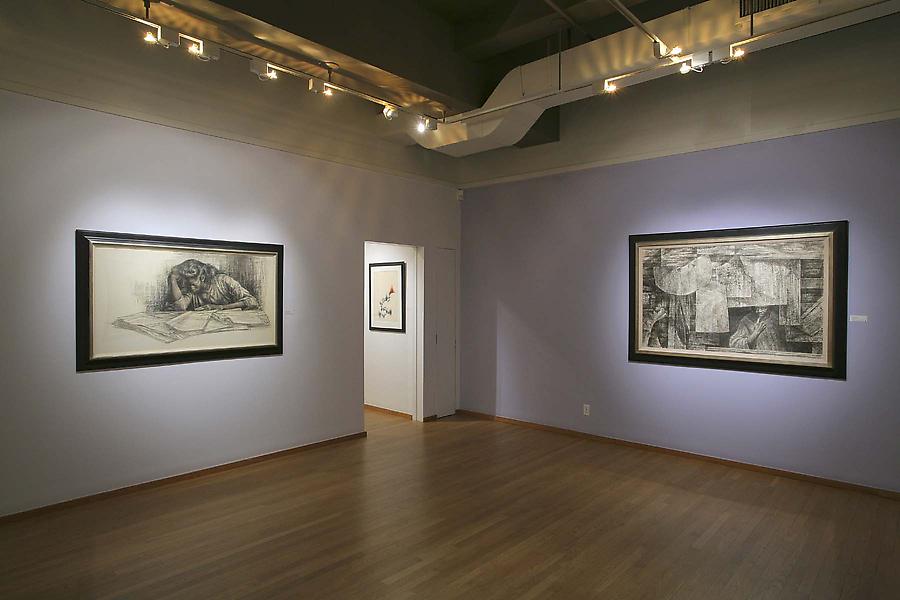 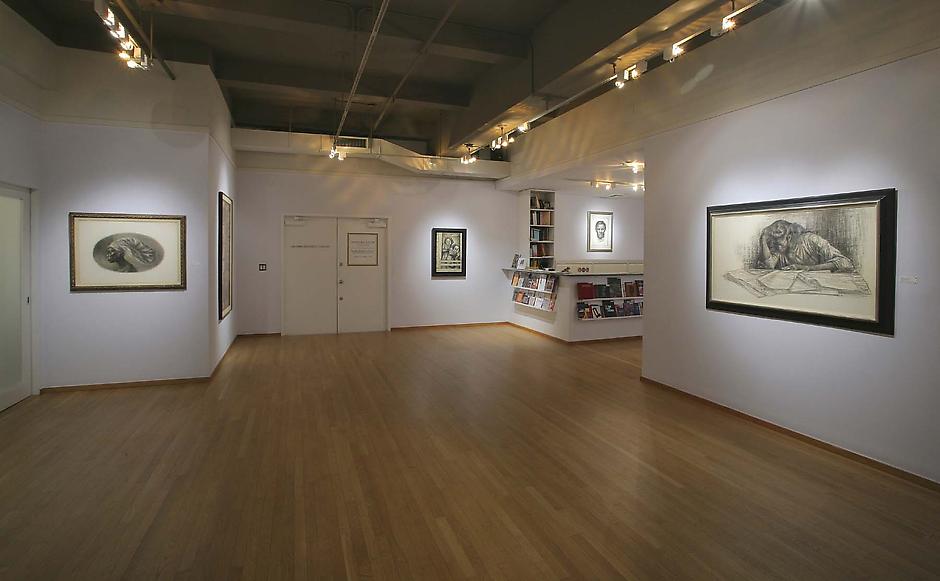 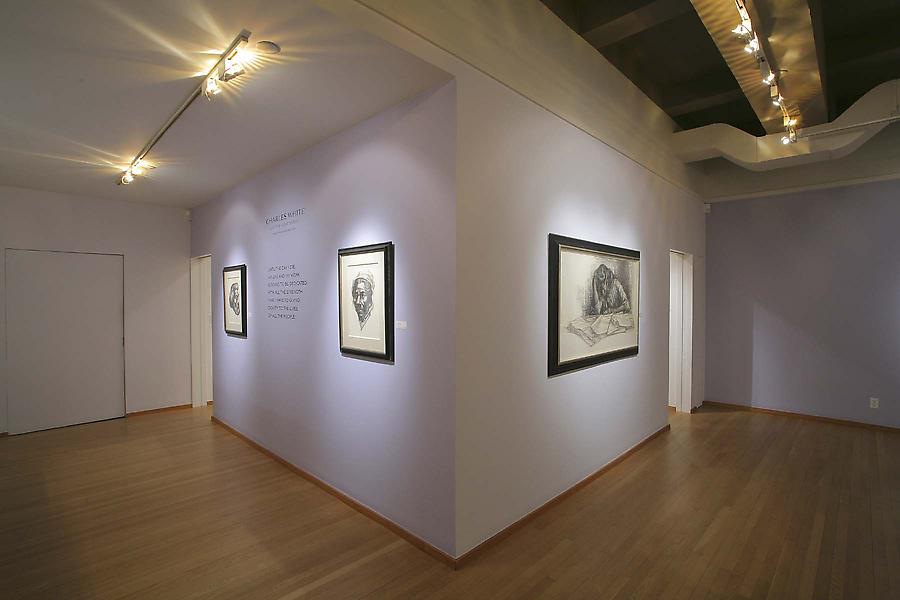 "I am interested in the social, even the propaganda, angle in painting; but I feel that the job of everyone in a creative field is to picture the whole scene. . . I am interested in creating a style that is much more powerful, that will take in the technical end and at the same time will say what I have to say. Paint is the only weapon I have with which to fight what I resent. If I could write, I would write about it. If I could talk, I would talk about it. Since I paint, I must paint about it."

(December 16, 2008 - New York) -- Michael Rosenfeld Gallery is pleased to present its first solo exhibition featuring the work of Charles White (American, 1918-1979). Let the Light Enter, Major Drawings, 1942-1970 will feature a dozen drawings that reveal the extraordinary draftsmanship of an artist dedicated to the heroism, tribulations, hopes, histories, and strengths of known and unknown African Americans. Drawn with bold and courageous lines, his graphite portraits transcend their subjects, revealing a broader human experience. For noted art historian and author James A. Porter, Charles White was one of the great interpreters of the history and culture of black Americans: "Charles is an artist steeped in life; and his informed artistic vision conduces to an understanding of vivid pictorial symbols which, through large as life itself, are altogether free or false or distorted ideas or shallow and dubious emotion."

Charles Wilbert White was born in Chicago in 1918. When he was a child, his mother would drop him off at the public library or the Art Institute of Chicago while she ran errands. These early experiences instilled in Charles a love of reading and art that his mother further encouraged, buying him his first set of oils when he was only seven. At the age of nine, Charles began taking long trips to see relatives in Mississippi, where he learned about the history of his family and fell in love with southern African American culture. In seventh grade, he was one of 500 Chicago public school students to receive a scholarship from the James Raymond Nelson Fund to attend Saturday art classes at the Art Institute of Chicago.

Although White was spared the Jim Crow laws of the south, he grew up in a divided city, where he still had to contend with racism. At age fourteen, White read Alain Locke’s The New Negro, which sparked a sense of pride and a passion for black American history, but caused problems for him at school among teachers who labeled him a troublemaker for questioning the curriculum. In 1934 and 1935, he won scholarships to study art, and both times, when White and his mother showed up in person to claim the scholarships, they were told they were no longer available to Charles. Finally, in 1937, White earned and received a scholarship to attend the Art Institute of Chicago. The following year, he joined the WPA, first as an easel painter and then in the mural division. However, even within this government-sponsored program, black artists had to fight for equal treatment and opportunities.

From 1939 to 1940, White worked on Five Great American Negroes, a five-by-twelve-foot canvas depicting Sojourner Truth, Booker T. Washington, Frederick Douglass, Marian Anderson, and George Washington Carver. During these years, he was also commissioned by the Associated Negro Press to create A History of the Negro Press, and three of his artworks were included in the Library of Congress exhibition The Art of the American Negro. While in the WPA, White also met and befriended photographer Gordon Parks, and the two of them would often walk through Chicago’s South Side together, photographing and sketching the biography of the neighborhood.

In 1941, White met and married Elizabeth Catlett and moved to New Orleans, taking a teaching position at Dillard University, where Catlett was chair of the art department. A Julius Rosenwald Fellowship in 1942 enabled him to study at the Art Students League in New York City and to travel throughout the south, doing research and making studies for his mural The Contribution of the Negro to Democracy in America. With the funds from an additional Rosenwald Fellowship the following year, White spent a year creating the mural at the Hampton Institute (now, Hampton University), where he met and befriended art professor Viktor Lowenfeld and his student at the time, John Biggers. After being drafted into the U.S. Army in 1944, White contracted tuberculosis and spent nearly two years convalescing in a hospital in Beacon, NY. Once recovered, he traveled to Mexico with Catlett and spent a year studying lithography at the Taller de Gráfica Popular. The following year, White and Catlett divorced, and the American Contemporary Art (ACA) Gallery in New York mounted his first solo exhibition. In 1949, White became a co-founder of the Committee for the Negro Arts, and in 1950, Charles White married Frances Barrett.

Although he never joined the Communist party, White's political inclinations and friendships with leftist artists and/or intellectuals eventually led to his being called to testify at the hearings of the House Un-American Activities Committee (HUAC). Fortunately, for mysterious reasons, White was just as suddenly informed that his testimony was no longer needed. Undaunted, White continued to advance a politics of struggle in his art, celebrating historical figures who resisted slavery and depicting ordinary black farmers, preachers, mothers, and other workers with an unwavering strength and a silent, solid grace. He received various awards over the years, including a grant from the American Academy of Arts and Letters and a John Hay Whitney Fellowship. In 1956, poor health caused him to leave New York for Southern California, where he and Frances remained, eventually adopting two children, Jessica and Ian.

In California, White was geographically removed from the center of the civil rights movement, although he kept in contact with friends on the east coast and continued to contribute to the struggle for equality through the arts. In 1970, he traveled to Belize as part of his study of the history of slavery and of the “maroon republics” founded by escaped slaves throughout Latin America. Shortly after this, White became interested in wanted posters for runaway slaves in the United States, and with a fellowship from Tamarind in 1970, White worked extensively on his Wanted Poster series.

In 1972, White joined Henry Ossawa Tanner and Hughie Lee-Smith as the third African American artist elected a full member of the National Academy of Design. Throughout the 1970s, White remained committed to his art and to the vibrancy, joy, and pain of African American history and culture. He returned to mural painting a year before his death, with Dr. Mary McLeod Bethune—Last Will and Testament at the Mary McLeod Bethune Public Library, in Los Angeles, CA. Given the many hours White spent as a child in the public libraries of Chicago, the location of the mural is fitting as White’s last major painting. In 1979, after a distinguished career, White died of congestive heart failure, and a year later the town of Altadena, CA dedicated Charles White Park in his memory. White’s work can be found in major museums as well as public and private collections throughout the country.